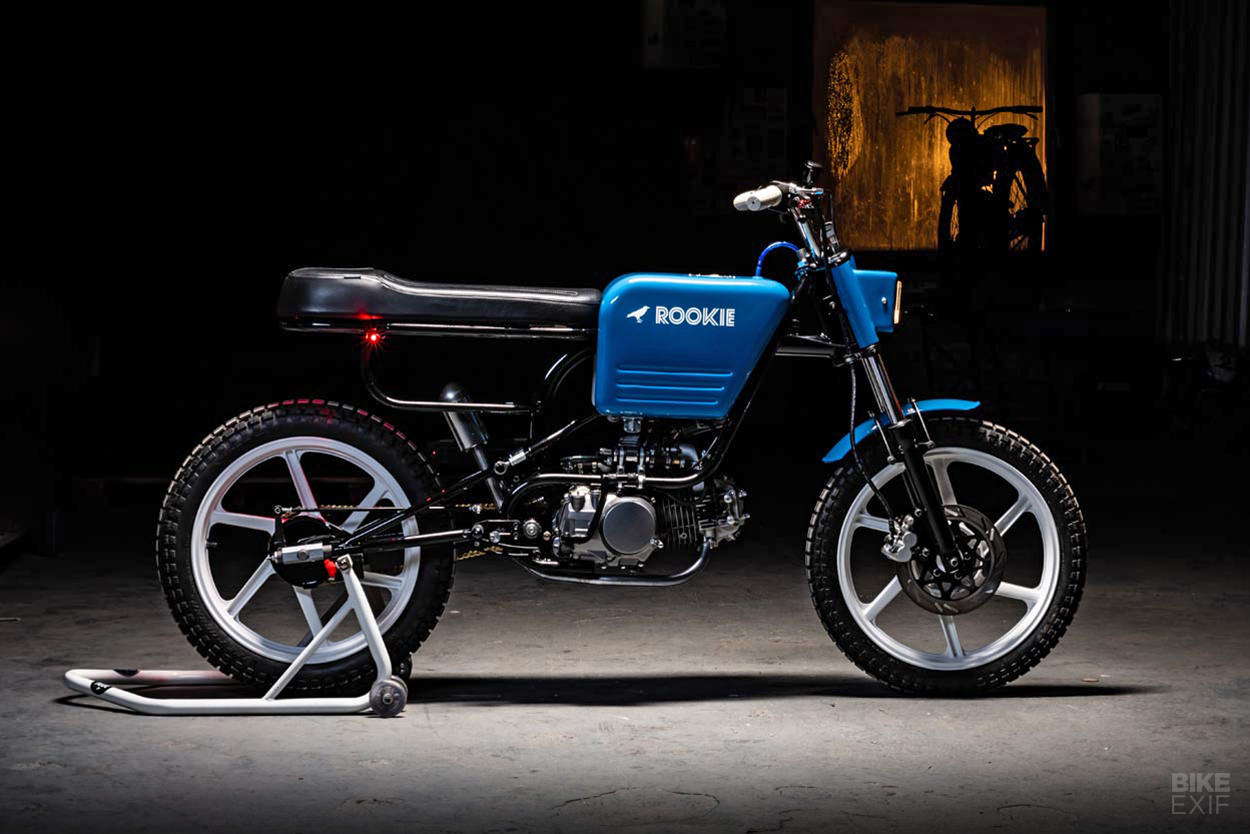 Any custom shop that builds its own frames gets our immediate respect. Granted, you need a certain degree of mechanical aptitude to strip down and tune up an engine, or install completely new suspension. But fabricating a new frame is a whole different ball game.

This angular and curiously appealing light motorcycle comes from Belgians Yves Noël and Wouter Bollen, who have been running Rook motorcycles since 2013. The guys describe ‘ROOKie’ as a “minimalistic urban scrambler with an eighties BMX influence.” 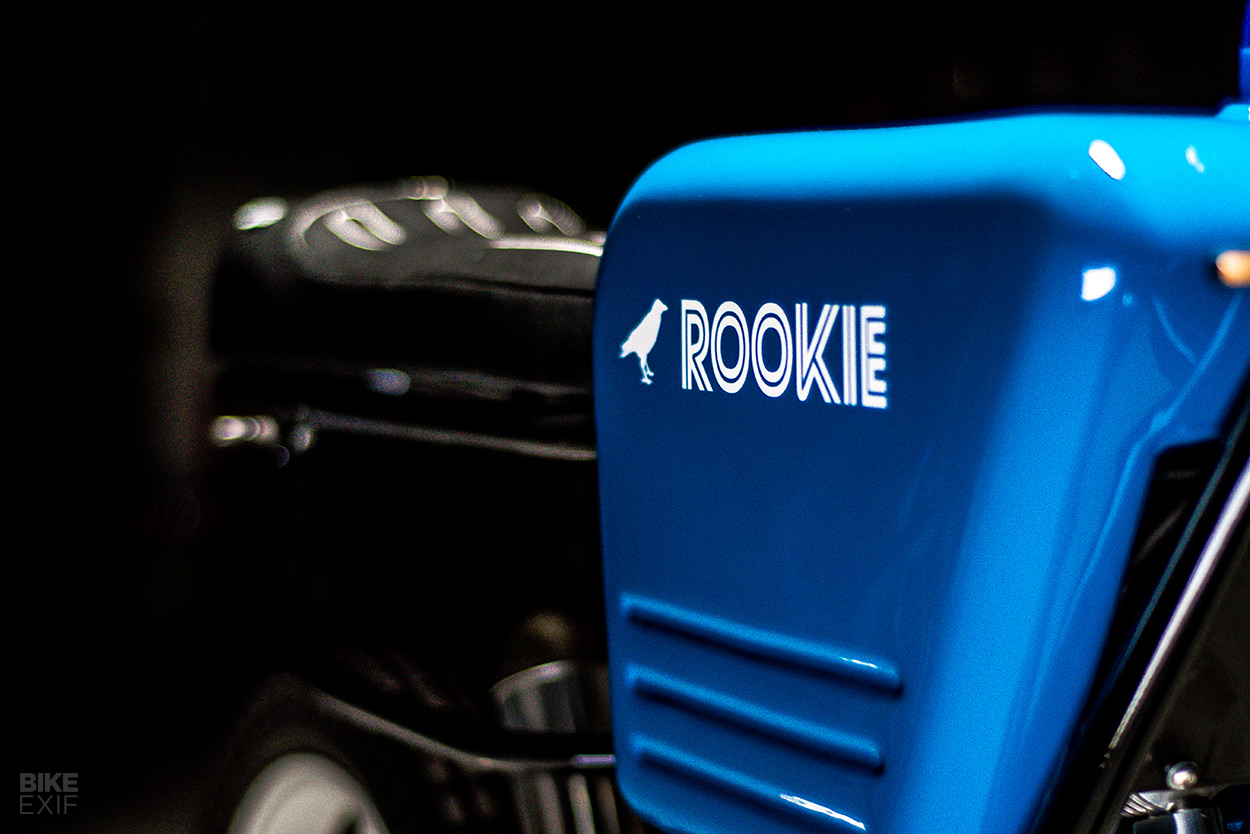 Rook are based in an old gunpowder factory near Brussels, which is probably worth a story in itself. The name doesn’t just refer to the famously intelligent black bird: it also means ‘smoke’ in Dutch, as in combustion engines, burning rubber and the beguiling odor of two-stroke.

It’s an odd but clever name, and you could probably describe Noël and Bollen in the same way. Bollen is a bird lover, moto freak and aggression expert—supporting social workers in his day job. Noël works for Jaguar Land Rover and loves enduro bikes. 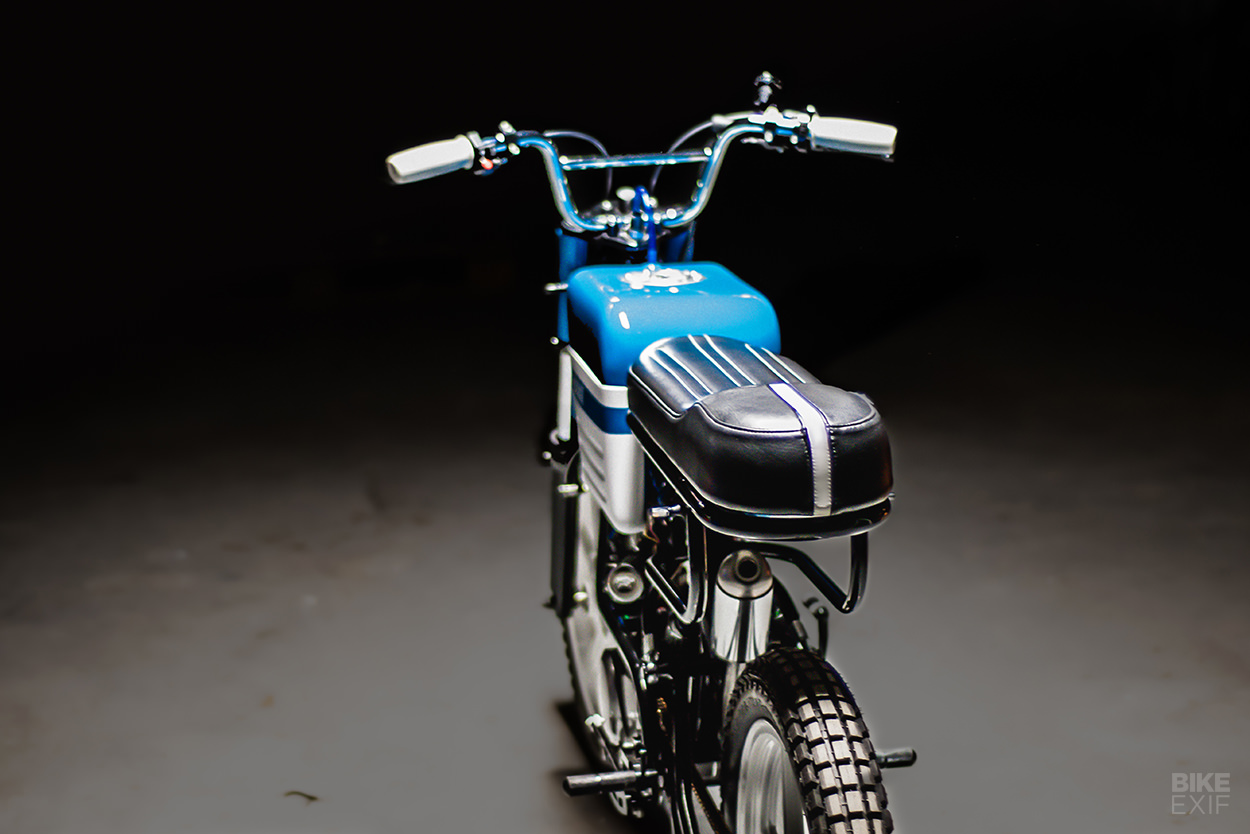 “Our specialty is light motorcycles, and our dream is to design and build a complete motorcycle ourselves,” says Bollen. “The ROOKie is our first prototype.”

Noël and Bollen have designed this bike the old school way, drawing a ton of sketches, and using a tube bender and a frame jig. They also got a present from a good friend: an old but very solid lathe. Then they bought a cheap SYM XS 125 for its wheels and forks. “It was a wreck that we got for 50 euros!” says Bollen. 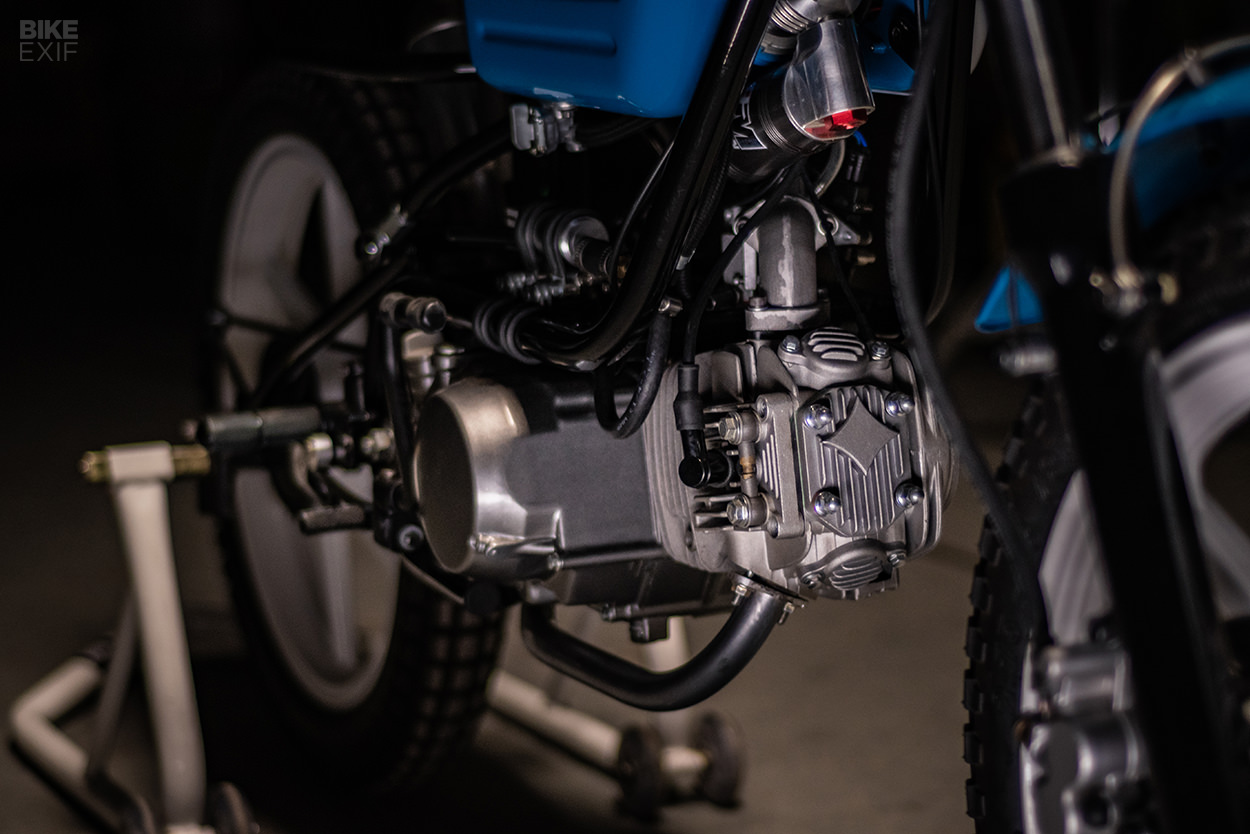 The engine is a YX 140 cc thumper—a Chinese-made Honda Dax clone that’s popular with pit bike builders. Despite its bargain-basement price, it has fuel injection and a switchable normal/eco mode.

“The greatest advantage of this engine is that we can spoon a variety of Honda clones into our frame,” says Bollen. “From a modest 50cc for a youngster to a 200cc 4-valve Takegawa for adrenalin junkies.” The exhaust header is custom made, and snakes discreetly between the swingarm and the rear wheel. 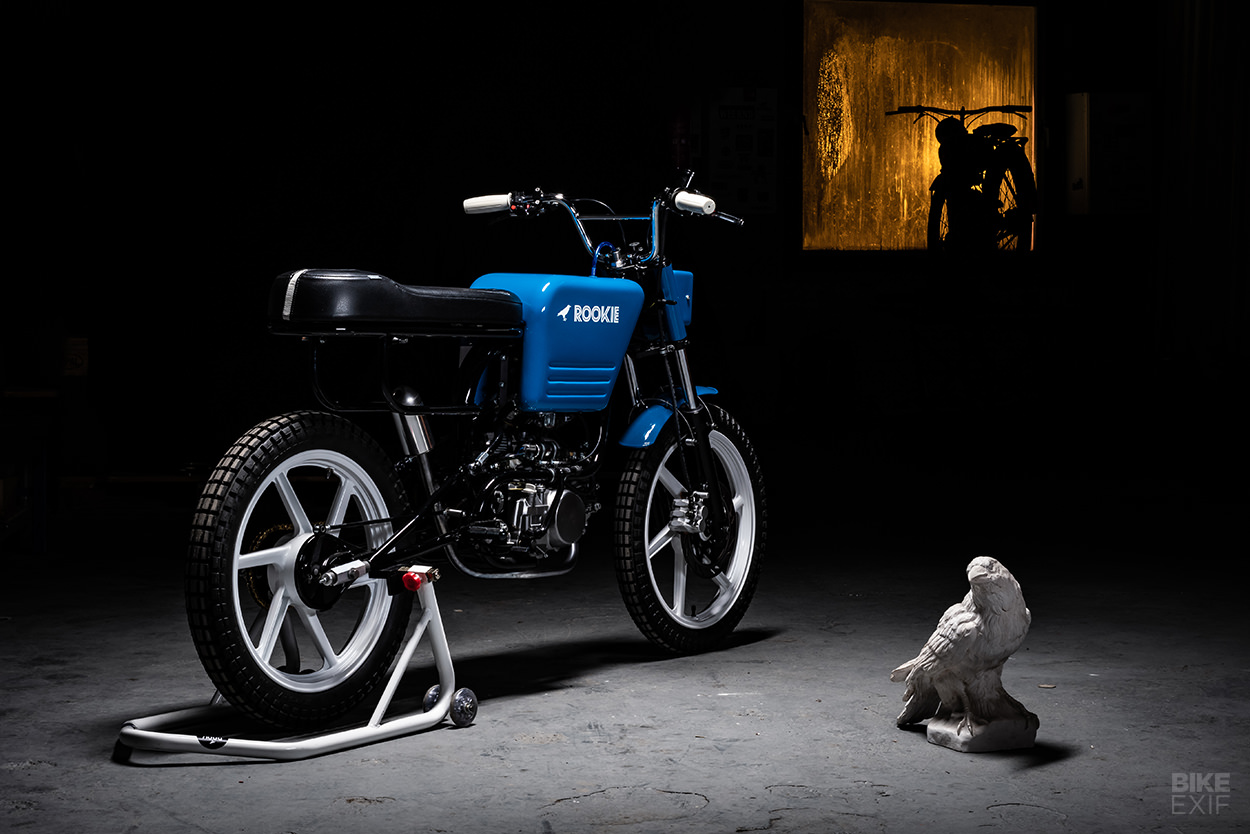 The custom frame and swingarm are crafted from 25CroMo4 chromoly steel, and Rook made the chain tensioner too. The rear suspension looks like a rigid setup at first glance, but it’s actually a link system with a fully adjustable shock absorber from local maker Moto Tuning Mol, hidden under the tank. 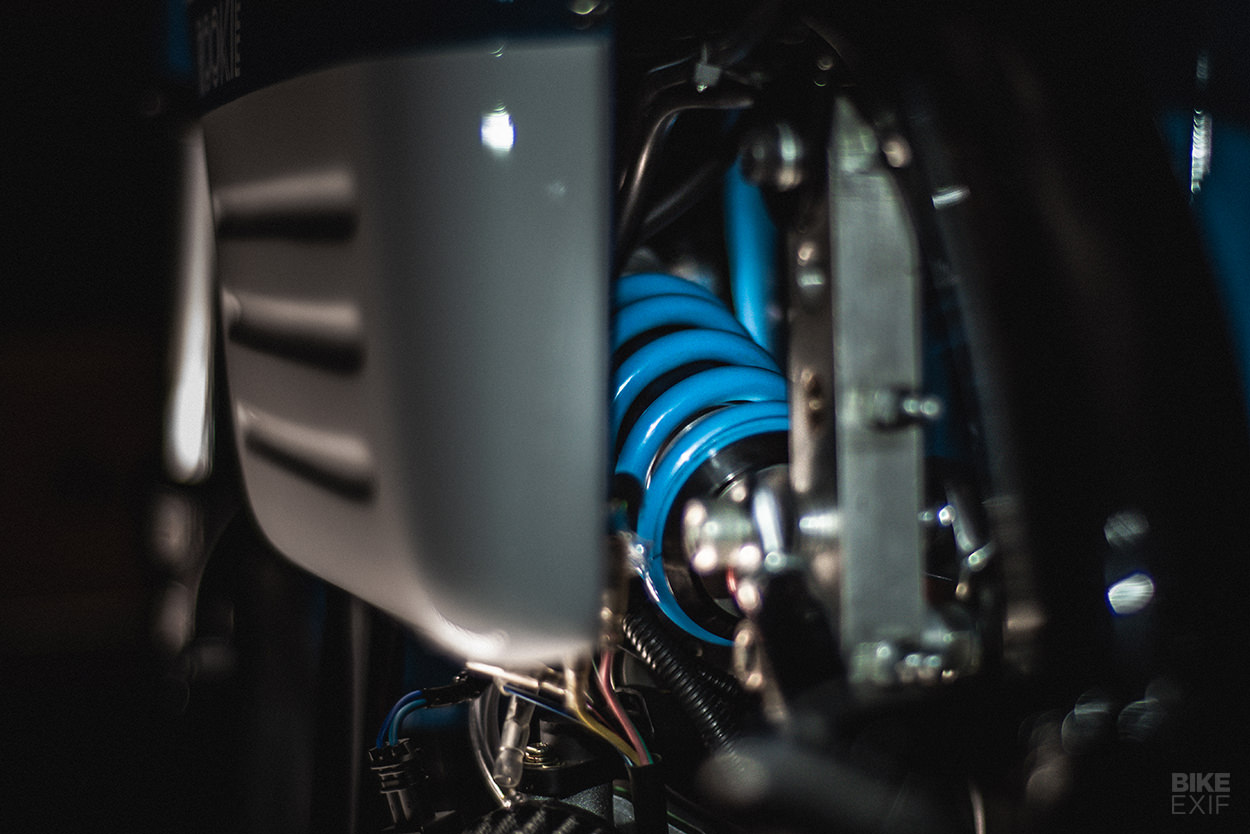 The organic design of the frame contrasts with the rectangular aluminum tank and headlight nacelle, which were made by the local fabrication specialist Streug Metal Shop. The endearingly square tank has three bead-rolled indents to visually ‘break’ its volume and it’s secured with Silentbloc rubber mounts. 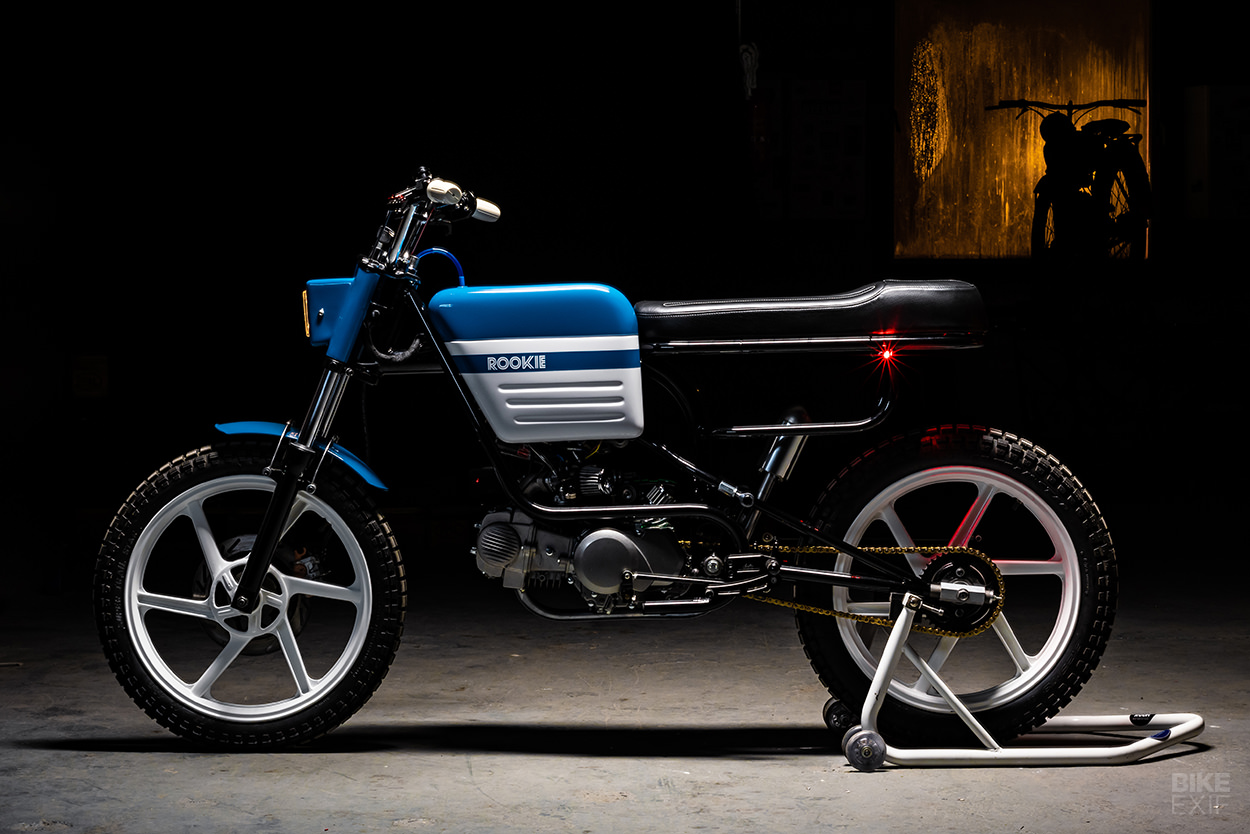 The left side is a dummy: it’s home to electric components such as a lithium-ion polymer battery, the CDI and ECU boxes, ignition coil, voltage regulator and more.

“We thought: let’s embrace asymmetry,” says Bollen. “So the cover of the dummy tank is painted in signal white, with a stripe in Volvo Rebel Blue and the ROOKie logo. The rest of the tank, headlight and front fender are painted in solid blue.” The paint is stunning and was done by CQ & S Carrosserir. 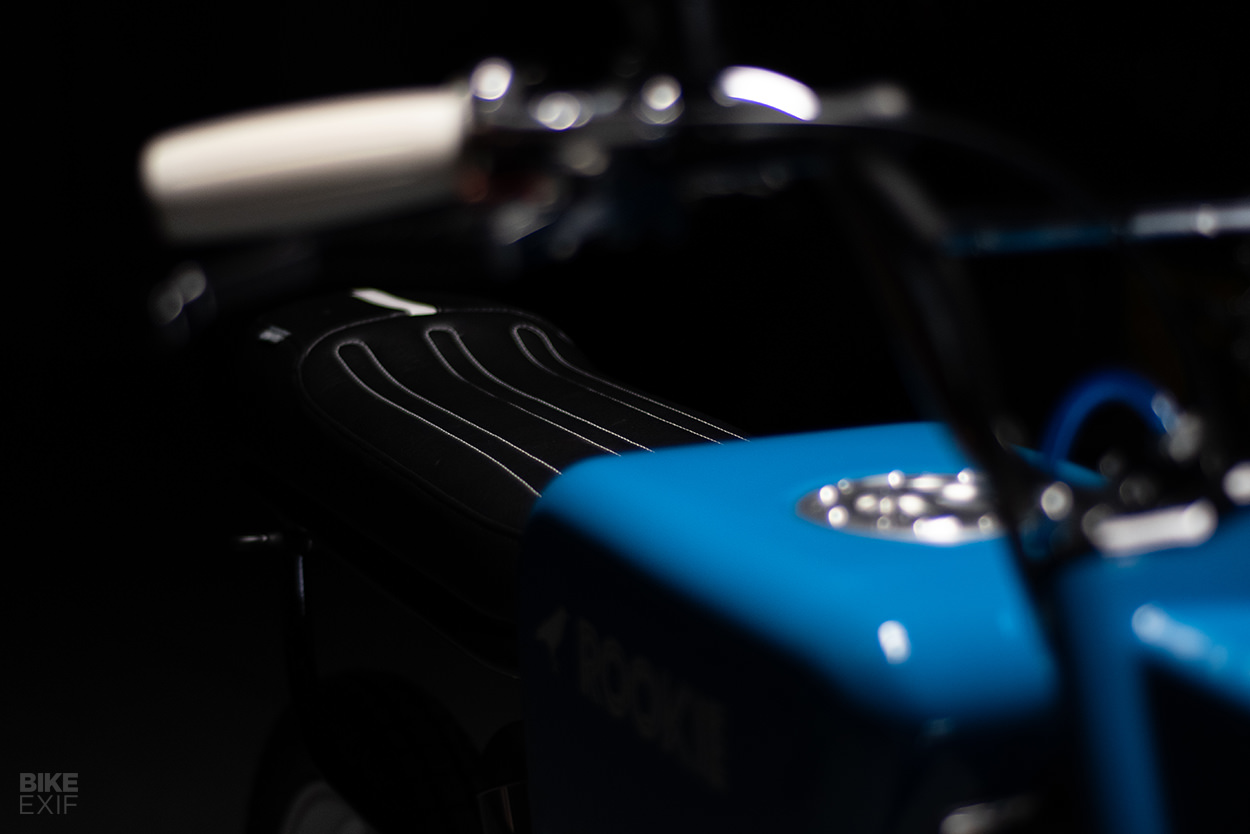 There’s a matching white stripe across the back of the seat (by local specialist Sewing John), which sits on a stainless steel pan. The indents on the tank are mirrored with three narrow rolls in white stitching on the seat itself.

The rectangular headlight unit flows neatly into the triple clamp and two micro LED Indicators are mounted on either side. At the back are more micro LEDS handling blinker, rear light and stoplight duties. The front fender is a modified aftermarket item—as are the rearsets, which were originally designed to fit the Suzuki Bandit. 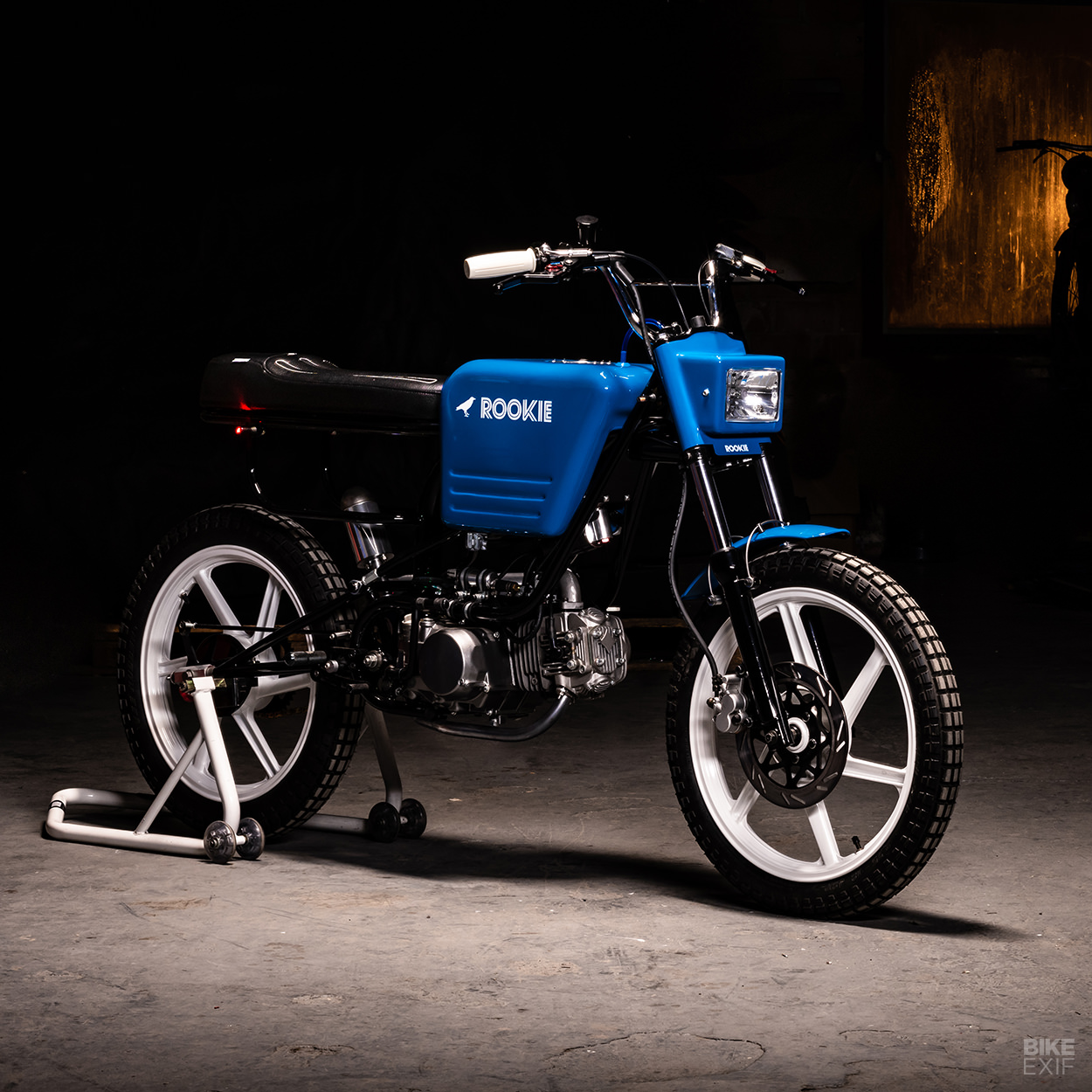 White grips on the Kitaco handlebars and the white wheels will appeal to the Vans-wearing brigade, and the chunky Vee Rubber tires add to the eighties BMX look.

“The first step is done—we built a motorcycle that’s a wink to our youth: the mighty Honda PA50 Hobbit/Camino!” 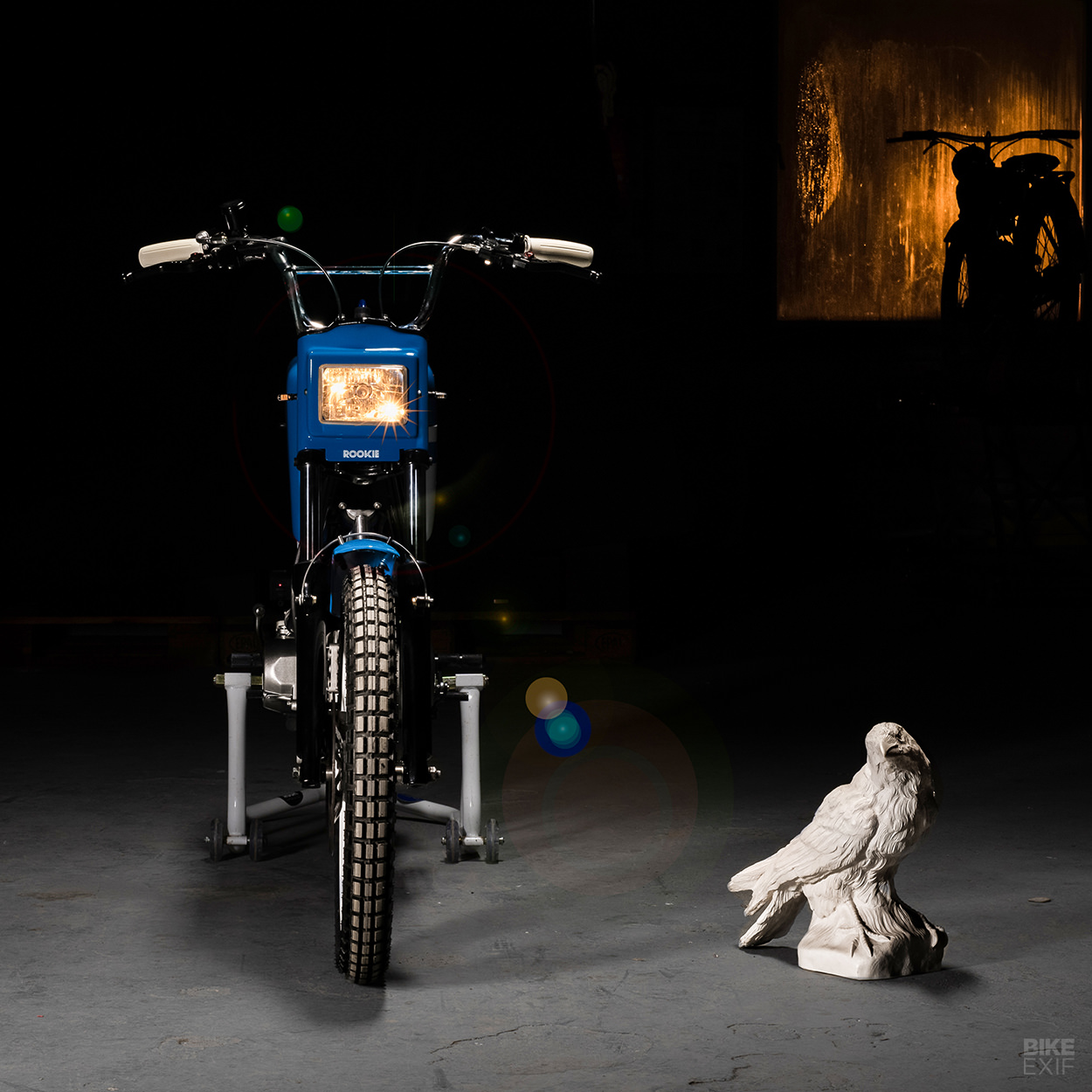 As a prototype and test bed, ROOKie is not homologated for road use. But a follow-up is in the works, and that one will be road legal.

We reckon Rook are onto a winner here. 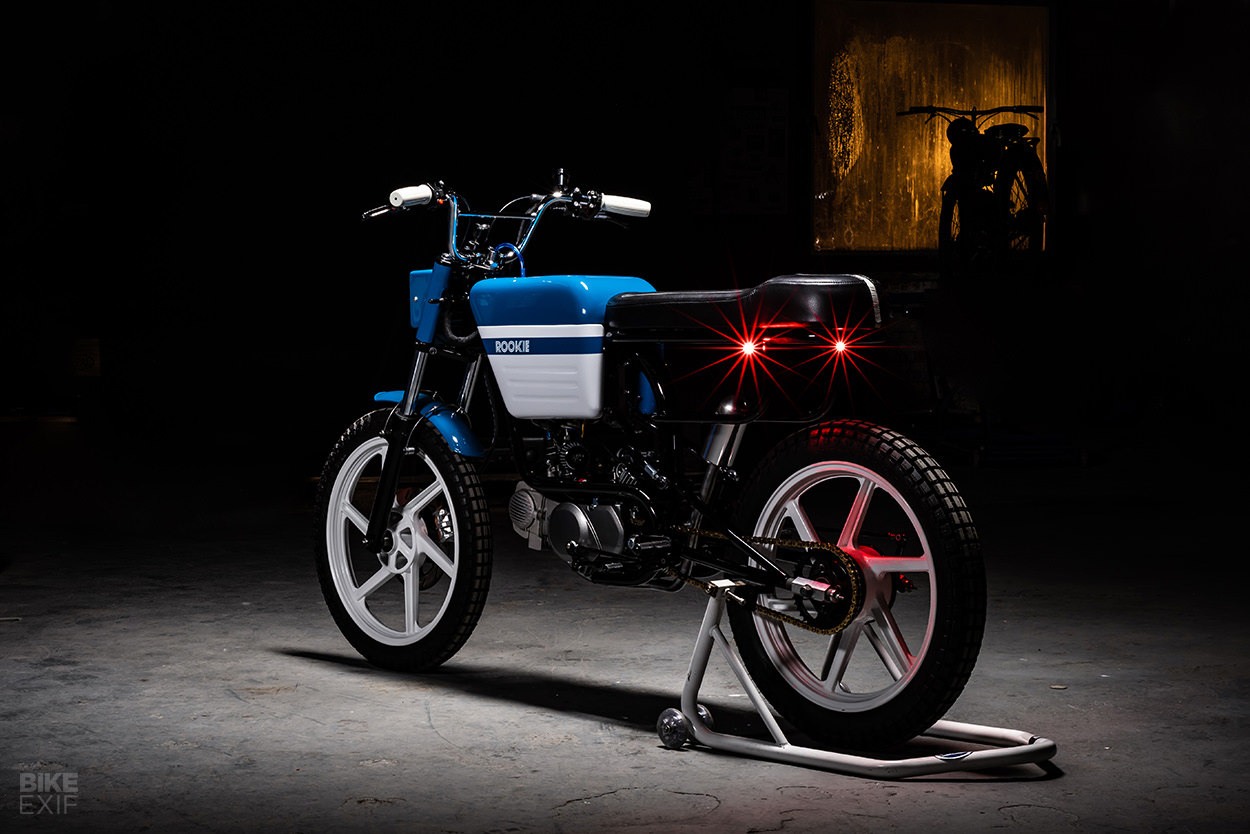